After buying six sows from ethnic minority villages in Vietnam in 2009, Nguyen Van Minh began raising native/indigenous pigs. Six years on, Nguyen, affectionately known as Mr Duc, had increased that number to 130 sows, and was supplying around 500 slaughter pigs annually to the market. His annual earnings had grown exponentially, by 1500%, to VND900 million (approximately USD40,000). According to researchers from the International Livestock Research Institute (ILRI) and the Western Highland Agriculture and Science Institute (WASI), key to his success has been Duc’s ability to create strong linkages with producers and buyers of indigenous pigs. 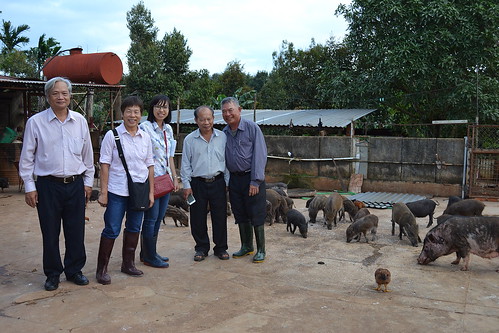 Mr Duc, an entrepreneur farmer from the Central Highlands in Vietnam, was one of the actors interviewed for the ILRI/WASI market study undertaken in December 2015. Through a series of informant interviews and focus group discussions, the research team examined opportunities available for niche indigenous pork markets in the Central Highlands.

Strengthening relations with buyers means building a reputation for safety. Mr Duc raises various breeds of pigs—such as soc pigs, wild pigs and their crosses—on an area of 1.5 ha situated far from residential areas. On his farm, Duc had built separate pig pens for different breed types at different age groups (in breeding units) or batches (in fattening units). To help control the transmission of disease, his staff were required to observed biosecurity measures, such as the use of high boots, dress scrubs and disinfecting powder.

Remaining competitive in the marketplace also means cutting unnecessary overheads and waste. So on a daily basis, staff collect manure which is then processed into a biogas tank to produce cooking fuel and material for organic crop fertilizer. Approximately a quarter of the farm land, 4000m2, was dedicated to banana and forage crop production, providing raw feed for pigs.

As part of his marketing efforts, Duc sells his pigs directly through his website, bypassing traditional practices, such as dealing with traders or bringing his pigs to wet markets. Customers from other districts and provinces place their orders online. The meat and live pigs are then delivered by land or air. Duc sells approximately 200 pigs outside the province, 300 within the province and 150 through traders. Although he regularly deals with about 10 traders, he does not find the system fair; they buy too cheaply from farmers and sell on to consumers at much higher prices. 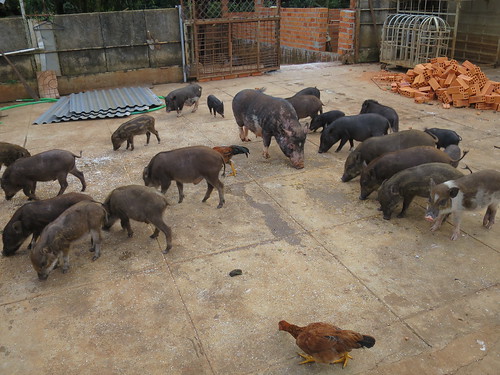 With the increasing demand for local pigs, Mr Duc would like to expand his business from 150 to 200 sows in the coming years. However, he lacks the capital and the land to expand. As a way of overcoming this constraint, he has begun collaborating with several small farmers from neighbouring areas to raise local pigs, a kind of informal contract farming.

This research on indigenous pigs in the Central Highlands is a collaborative effort between three CGIAR Research Programs—Agriculture for Nutrition and Health, Integrated Systems for the Humid Tropics, and Livestock and Fish.

One thought on “Bringing home the bacon, a Vietnamese native pig-farming success story”