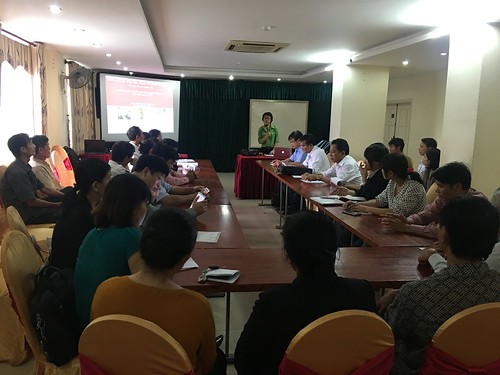 Research shows that adoption of good production practices by smallholder farmers in Vietnam can reduce diseases and lower mortality in pigs, increase farmer incomes by around 30% and improve their competitiveness in the market.

However, despite these benefits, many smallholder producers in the country have yet to adopt VietGAHP or Vietnamese Good Animal and Husbandry Practices. VietGAHP is a set of guidelines for best practices in pig production that has been rolled out to selected provinces in Vietnam. It is part of Livestock Competitiveness and Food Safety Project (LIFSAP), which is funded by the World Bank.

To learn more about the factors that hinder smallholder farmers’ uptake and compliance with VietGAHP guidelines, researchers from the International Livestock Research Institute (ILRI) and Vietnam National University of Agriculture (VNUA) co-organized and facilitated a stakeholder workshop in Dien Chau district of Nghe An province in Vietnam on 15 November 2016. Results from the study to evaluate the adoption of and the potential impacts of VietGAHP in Nghe An province were presented by the research team from ILRI and VNUA.

The workshop was attended by pig producers, implementing officers of VietGAHP and local authorities and representatives from the Department of Agriculture and Rural Development (DARD) of Nghe An province. All groups agreed on the benefits of VietGAHP, but their different positions and roles gave them different perspectives on the challenges of fully adopting/implementing the practices. 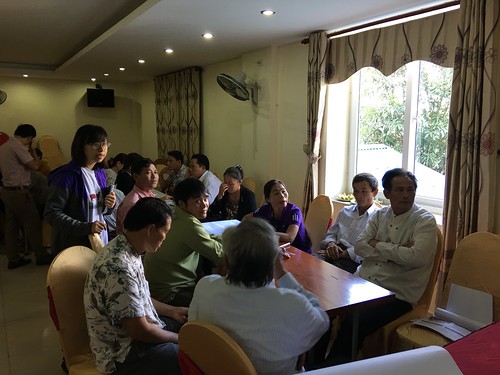 For smallholder farmers, some guidelines are difficult to comply with, such as keeping vaccination records and disease records and making them available to buyers and using treated water for pigs. Some guidelines requiring investment in infrastructure and equipment are too expensive to follow, such as moving pig farms from residential areas to planning areas, especially since land availability is a main problem, and building separate storage areas for inputs (feed, veterinary medicine) and production tools.

They proposed simplifying, and even eliminating, some guidelines they found difficult to comply with and follow. They also suggested support in the form of available land for pig raising, as well as financial support.

The implementing officers, on the other hand, talked about the challenges of encouraging adoption of VietGAHP since smallholders prefer traditional practices of pig raising. These traditional practices include raising pigs in residential areas, lack of waste treatment, a low level of VietGAHP awareness and compliance (for example, record keeping is not common) and lack of quality assurance for piglets and breeding stock, veterinary drugs and feeds.

They also added that the absence of price differentials between VietGAHP and non-VietGAHP pigs in local markets does not motivate smallholder farmers to adopt good production practices. They proposed enhancing training on production techniques for farmers; improving management of breeding stock, veterinary drugs and feeds; providing financing for equipment and slaughterhouse improvement; and adding proper branding/labels for VietGAHP pork.

According to the head of Nghe An DARD, they have set the following targets for 2017: increase VietGAHP exposure from 10 to 20 communes and increase the number of farmers adopting VietGAHP from 600 to 1000 farmers. They are also planning to establish 3 cooperatives in the province.

Read about the key findings from a stakeholder workshop held in Nghe An in February 2016.

See an earlier article about an ILRI-VNUA study that confirms benefits of good pig production practices.